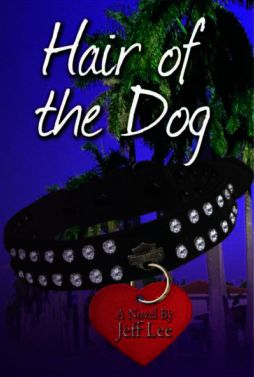 "Fish opened the envelope he found under the specified flowerpot. Inside was a cashier’s check, drawn on a local business bank and made out to him, in the amount of twenty thousand dollars. He folded the check in half, placed it in his shirt pocket, set the heavy flowerpot back where he found it and stood up.
Then from behind, he heard the unmistakable sound of a round being chambered into a large caliber automatic.
“Freeeze … muthah fuck … uhhh ..." the calmly spoken command carried all the menace of a man used to delivering it on a regular basis.
It also had the same charmingly breathless delivery as the late Marilyn Monroe.
Which made Fish wonder if maybe he'd stumbled into some Billy Wilder movie gone a little sideways."

It should have been an easy, Hollywood kind of case for wisecracking bounty hunter, attorney and repo man Moe "Fish" Fishbein -- just find some wanna-be starlet's lost Lhasa Apso. But before anyone can say, “have your people call my people,” her cut-rate jeweler boyfriend is murdered and the killer wants to shoot Fish -- and not in Technicolor.

With his armload of tattoos, Buddha-licious grin and old school Harley chopper, Fish is the go-to guy for showbiz A-listers with runaway spouses and agents whose celebrity clients have jumped bail. A desperate jeweler hires him to locate his trophy girlfriend's missing lap dog, but doesn’t mention the fortune in stolen diamonds he super-glued into the dog's collar for safe keeping.

The next thing Fish knows, his client gets whacked and now he's in the sights of a psychotic hit man who wears black Armani and talks like Marilyn Monroe. The gunman works for a corrupt attorney who wants the stones for himself. And before Fish can do the right thing and track down his client’s murderer, the hit man pops the girlfriend. Then he kidnaps Fish’s associate and offers to swap him for the collar. And the clock is running.

Now it’s up to Fish to find the pooch, rescue his buddy, and stop the bodies from piling up faster than an old Chuck Norris flick.