SCROTUS--So-Called Ruler of the U.S. 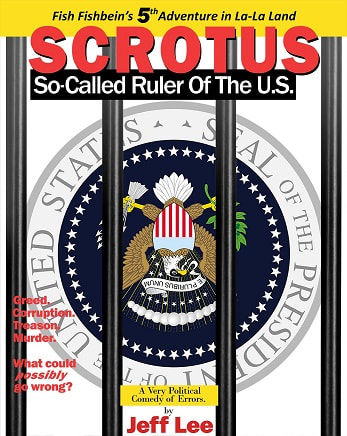 “Fish” Fishbein and his girlfriend, Shawna Kretschman, have a nice, quiet life. He’s L.A.’s repo man and bounty hunter to the stars, and she runs the police force on a South Dakota Sioux reservation.
Then, the President of the United States comes to town. And her quiet life turns upside down when she has to arrest him for trying to forcibly exercise his ‘executive privilege’ on her in the back of the presidential limo.
Shawna wants the tiny-handed prez to stand trial for his assault and a handful of other violent felonies. But first, she and Fish will have to take on a corrupt Attorney General who wants to dismiss all charges, and an army of private security contractors out for blood.
And down in the White House Situation Room, the supremely unqualified, corrupt and wealthy members of the president’s cabinet are negotiating with the Russians to invade the country and free their woman-groping boss.
If this goes on much longer, someone is going to have to step in and save Shawna, Fish and the American people from their own government.
They say that politics makes for strange bedfellows. In SCROTUS’ case, very strange. Very fast-paced and very funny, too. With more Alternate Facts than you can shake a White House Press Liaison at.
Imagine All the President’s Men meets Jason Bourne and The Three Stooges.
It’s bigly. It’s beautiful. You’re gonna love it.
It’s a done deal.


​LAUNCHING MAY 16, 2018
But you can check out the first few chapters now.
Just hit the "Go to Sample Chapter" link below.