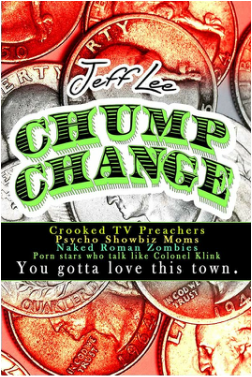 You think it’s easy being the Bounty Hunter and Repo Guy to the Stars? Just talk to “Fish” Fishbein. If he isn’t trying to round up a heavily lubricated ex-rocker, he’s flying down the freeway in a repoed Wiener Mobile, chased by the pistol-packing deadbeat who owns it.

A bail bondsman hires him to track down a crew of unwise guys who blew off their court date to snatch L.A.’s monthly parking meter take -- 300 grand in quarters. Then they start dropping like flies. And Fish has to catch the killer.

With more than seven tons of quarters at stake, bodies are dropping faster than turn-downs on America’s Got Talent. And if Fish and his hog-riding buds, Kenny and Einstein, don’t nab the killer in a hurry, they could get eliminated themselves.

Chump Change is author Jeff Lee’s third book in his Adventures in La-La Land series, following The Ladies Temperance Club’s Farewell Tour and Hair of the Dog. If you enjoy the whacko characters, situations and fast pace that Janet Evanovich, Carl Hiaasen and Elmore Leonard bring to the party, check out all of Fish Fishbein’s big adventures.

WARNING: Contains some of the most hysterical explicit sex scenes ever written.